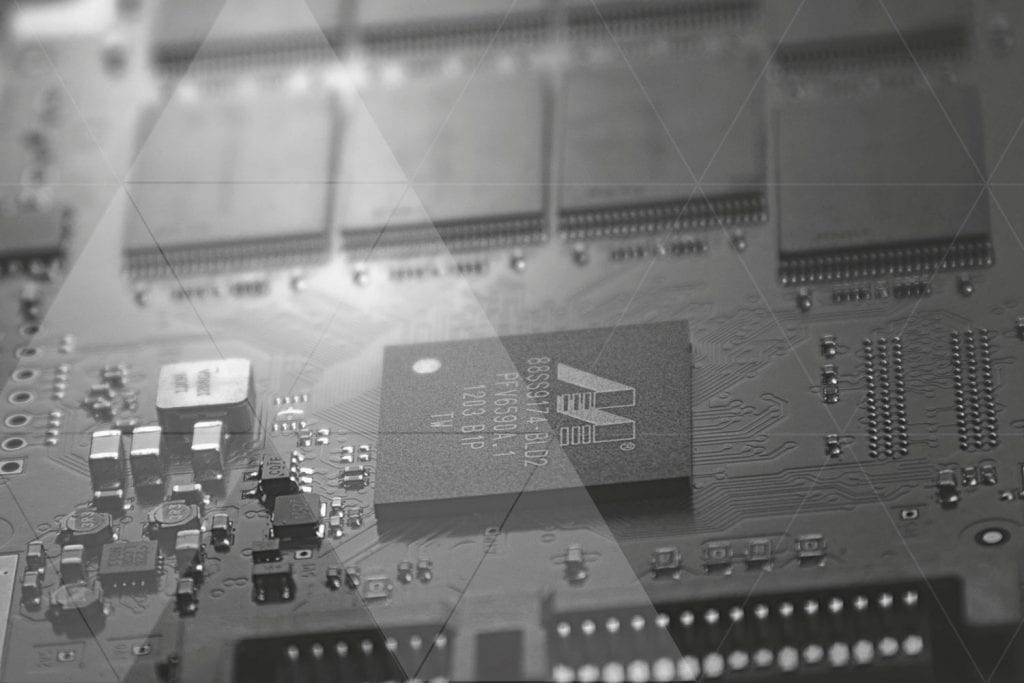 The Internet of Things

Today, people and technology are almost permanently connected by miniaturized yet powerful computers and sensors. Soon, networks of billions of sensors and computing nodes could span the globe to form the Internet of Things (IoT). The IoT will have a tremendous impact on our personal life, our environment and on global businesses and manufacturing. A lot of IoT devices will be used directly on, in, or in close vicinity of the human body, thus enabling unobtrusive measurements of body activity, biopotentials, biomarkers and many other parameters. The generated data can be used in personal assistant devices, point-of-care healthcare or in security or defense applications.

The commercialization of the internet in 1990 was the foundation for an unprecedented level of interconnectedness within mankind. In fact, the invention is considered by many experts as influential on society as the invention of the letterpress. In only 30 years, the network grew from a couple of hardwired connections between universities to billions of connected nodes spanning the whole planet.

While the internet of the early days was still bound to bulky and stationary hardware, progress in semiconductors fabrication, battery storage, wireless communication and related fields freed the internet from its chains and led to small, lightweight and portable connected devices. Today, we are almost constantly in touch with other people and technology through powerful miniaturized computers that we carry around. For the internet, this development was just a warmup and we are now moving on to the next level of connectivity.

Recent developments in ultra-low power circuitry, communication protocols, energy harvesting, and sensors will lead to an even higher level of networking that will include billions of smart devices in our environment. Because this development extends the human operated internet of today to all ’things’ on the planet, it is called the Internet of Things (IoT).

Existing data and future predictions show that the growth of the IoT will almost exponentially increase the number of connected devices in the upcoming years. While the development was constant but slow in the recent years, even conservative market analysts expect an increase to 20 billion devices by 2020. The corresponding market will be worth over 3 billion U.S. dollars. Other studies are even more optimistic and forecast 24-30 billion devices in 2020 and 75 billion by 2025. 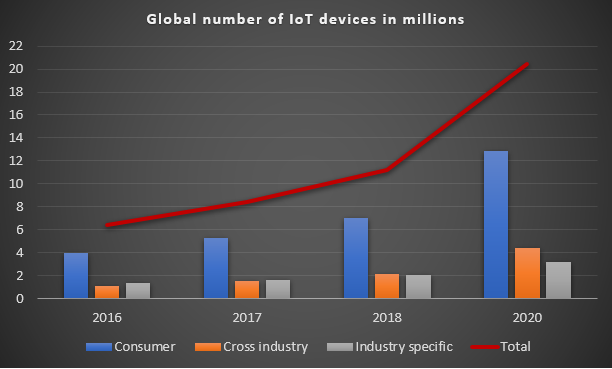 Past, current and predicted number of global IoT devices by category. Source of data: Gartner (2017)

In the moment and near future, the largest percentage of IOT devices is likely to be used in consumer applications such as notebooks, smart phones, personal health care, home automation and environmental monitoring. But IoT provides also exciting promises for industries where distributed smart devices can help to reduce cost, increase safety and optimize processes. Today, most industrial IOT (IIOT) devices are specifically construed to fulfill the needs of particular industries. In the next years, the majority will be increasingly generic and modular to allow the application across different fields. The recent developments, existing challenges and future promises of the IIOT in the context of the Industry 4.0 will be covered in a future article.

Within the multitude of applications for the IoT, there is an ever-growing class of devices that are worn in, on and around the human body. Wearables are already established on the consumer market and will continue to perfuse our daily lives by sensing, recording and exchanging data with surrounding networks. Activity trackers, smart-watches and similar devices carry sensors that measure body activity, biopotentials, biomarkers and many other parameters. These parameters are processed on the spot or transmitted to a smartphone where they can be evaluated and correlated with additional data coming from the web or other sensor networks.

Massive growth is also projected for wearables in the medical sector. IoH based technologies can fuse personal and professional healthcare as we know it today into wearable, point-of-care devices. Inside the body, smart implants could monitor bodily functions in real-time, alert doctors, provide electrical stimuli or use actuators to dispense medication. On the body surface, IOT wearables can unobtrusively monitor patients in the hospital or in the comfort of their home. This includes recording, evaluation and communication of biopotentials such as ECG, EEG and EMG, biomarkers or simple fall detection. In 2020, remote patient monitoring is projected to be one of the IoT use cases with the highest revenue.

The same technologies could be extended to the work environment, in particular to jobs with an increased health risk such as in the security or defense sector. Wearables could save lives by real-time monitoring of a person’s physiological status and by sending automated alerts and location in the case of emergency. To work in challenging and exposed environments, these devices will have to be small, unobtrusive and largely independent from electricity sources.

The internet of things is no longer a vision for the future but already developing around us. Yet, to exploit its full potential, many obstacles, legal and regulatory aspects still have to be mastered. The following articles will cover challenges and risks associated with the IoT, the problem of supplying IoT devices with energy and the IIOT and Industry 4.0.